Assignment: Read this article about the ‘ethical’ social network Ello which promises not to data mine. What do you think could be the wider consequences to social networks of Ello’s stance? Do you think social media users will respond positively? How would you predict Ello’s future?

With the frequent use of the terms “ethics” and “ethical” in this post, it’s important to keep in mind that what constitutes ethical behavior and how some may define ethics differs among individuals. Additionally, the term ad and/or advertisement may also seem like words with concrete definitions; however, the article claims that Ello, as a Public Benefit Corporation, “won’t make money from selling ads.” Does this mean pro-bono ads are fair game, what about ads promoting their cause and motives for what they deem to be an “ethical experience?” Would in-kind donations in exchange for ad space fall within or outside of this statement? You see, even when we think we are rather clear with our terminology and motives, there almost always remains some level of ambiguity.

As powerful as the manifesto for Ello is (as shown below), and I truly admire that they agree not to sell their users information to companies, it’s difficult to fathom that Ello will (1) gain enough traction by limiting those allowed to use it or (2) make enough money to continue to operate solely off the sale of widgets and plugins. Although individuals are less than thrilled about the idea that their information is being sold to marketers, for which there should likely be more strict regulations, our society has become accustomed to being marketed to. 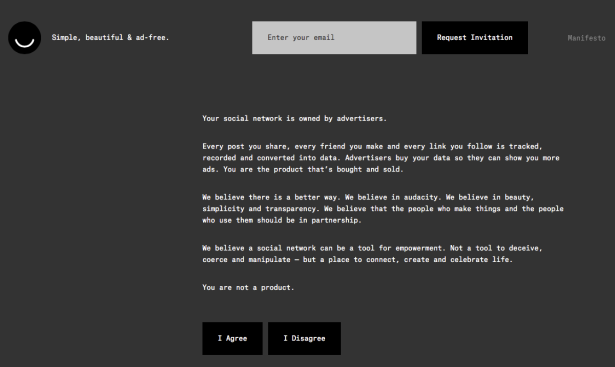 Whether it be television or a live sporting event, almost any form of entertainment provides opportunity for marketers. Why? Simply because it’s where the people, their audience, is located. While I personally don’t agree with data being sold, I do think it is fair game for platforms to utilize the information themselves, which may include strategically placing ads for companies for a particular demographic. That’s not to say I believe companies should be able to buy a list of individuals and their personal information to do whatever they please with, but rather they are paying for the ability to market to individuals that fit a certain demographic (without owning the information). We’ve allowed this practice for other platforms such as television advertisers that only want to market to people in a particular area watching certain types of shows.

I’m also in support of such information being used to improve service and/or be utilized for proactive reasons, including but not limited to safety. Essentially, I believe Ello limits itself substantially (and financially) by claiming they will not (EVER) participate in advertisements! Instead, I believe it could be more beneficial for Ello to promise not to sell personal information.

Without advertisers and with limited exposure, I predict a bleak future for Ello, and a slow death, similar to MySpace. (Which, by the way, does MySpace even exist anymore?) Oh, that’s right, we’ve forgotten about platforms that don’t have audience members, particularly when there are mammoth size companies to compete with and more than enough social networks to keep up with as is.

Need proof that Ello hasn’t gained traction, just look how unpopular the assigned article about the platform is: 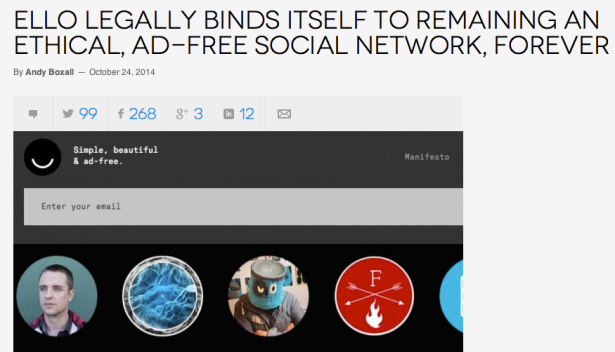 While I don’t think Ello’s stance will force the hand of social media moguls such as Facebook to do away with advertising, I do think it may force social platforms to be more accountable for securing information and disclosing what they do with it. Initially, pending Ello even gets enough exposure, I believe some individuals will jump on the bandwagon and advocate for platforms of this nature; however, eventually they (the users) will want to participate on a platform that they can connect with others and to to do so will ultimately be forced to resort back to the platforms they once denounced.

Although I pride Ello for their efforts, I believe they could have utilized the multi-millions of dollars they have funded to raise greater awareness about how social media platforms are using our information to create an initiative for more strict regulations. Hell, a couple million dollars in promoted Tweets and Boosted Facebook posts could probably create quite a stir, in particular when using the platforms themselves for purposes of exposure (oh, the irony). Of course this would be going against their mission, but would it be worth while to prove just that point. How powerful would it be to state the advertising criteria you used on the ad itself and say that is why you are being targeted, because social platforms have allowed me access to your information for marketing purposes.

2 thoughts on “Ethics of Data Mining”