Cosmoprof North America is a business-to-business trade show for beauty industry professionals. The event is not open to the general public. The attendee target market includes distributors, manufacturers and buyers for professional and retail stores.

Cosmoprof has profiles on the  following social media channels:

Of the channels listed, Twitter appeared to be the most active, with numerous posts throughout the event, many of which included the following hashtags: #cosmoprof2014, #CPNA2014, #cosmoprofna, as well as hashtags for booth numbers, which appears to be common practice for trade show social media promotion.

Prior to the event, there were a limited amount of Tweets sent to promote the event. There were two Instagram posts prior to the event showing where registration takes place and advertising the interactive area at the trade show. 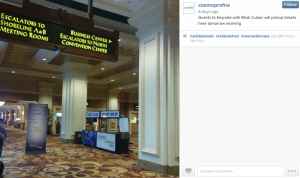 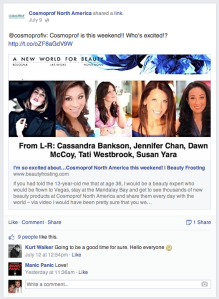 The Cosmprof Instagram account had 40 posts total from July 11th promoting the event, through July 16th, following the event. While many of the post during the event included exhibitor booths and products, the post-event posts seemed irrelevant to the event.  The Cosmoprof Facebook page had only 8 posts during the event, and one prior to the event promoting their Beaut-E Zone panel.The Beaut-E Zone concept was an interesting touch, in that it aided in the creation of content, but pointed back to the panelists’ social media accounts (i.e. blog, YouTube, etc.) rather than Cosmoprofs.

Cosmoprof’s Pinterest account has only 7 boards and is relatively inactive, especially given the target market (the beauty industry). While there is a Discover Beauty 2014 board that has some beauty products on it, they were posted almost 4 weeks ago. Their YouTube account is also relatively inactive with only two videos, one of which is labeled CPNA 2014 Event Highlights but was posted prior to the trade show and contains content from the 2013 event. While they have a LinkedIn account, it is private, so I am unsure to what extent it is used for the event.

Overall, there was not an extensive amount of pre-event social media content, and it is evident that Twitter was by far their social media channel of choice during the event. While they did use hashtags for the event, they could have increase awareness of them prior to the event and encouraged vendors to set up an account well in advance. It appears they used hashtags for many of the exhibitor company names, rather than Twitter handles, which I can only assume is because they do not currently have an account. As the hashtags caught on, you saw more and more retweets from the Cosmoprof Twitter account. Upon the conclusion of the event there were many goodbyes using the previously mentioned hashtags, and the event date for next year was also released. 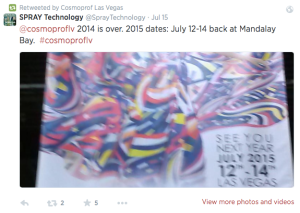 It is not surprising that Twitter gained the most attention throughout the trade show. Social media channels that offer real-time updates seem more conducive for live events. Also, for an event tailored more to industry professionals, maybe exposure on other platforms is not as critical, as they are more interested in building relationships. While Instagram and Pinterest would seem to be a good demographic for this industry (i.e. young females), the images posted are less appealing as they are more about the trade show than the products accessible to the public. Given that this is a business-to-business event (not business-to-consumer), this may be why Twitter is more fitting.

Cosmoprofs social media presence included a limited amount of resources for exhibitors, and could have included more tweets with photos throughout the show. While there were a few pre-event social posts, and one showing the location of registration, there were not many, and there were none promoting Las Vegas. Even their website has few resources about Vegas; however, it does include more than enough information about the trade show event.

On their website, and in a limited amount of social media post (some of which were mentioned above), there is reference to some intriguing concepts conducive to the beauty industry and  internet marketing. The trade show included an Interactive area, which provided event attendees with the opportunity to utilize analysis tools to better understand their online presence. There was also a “Beauty Gone Viral: The YouTube Influencers” event, which included a five person panel of beauty experts that discussed YouTube as a growing media channel in their industry and how video plays a massive role in communication for beauty brands. 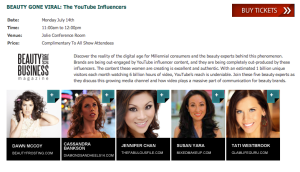 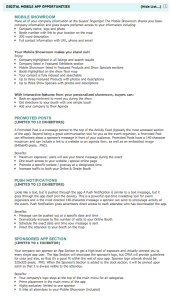 Not only did Cosmoprof provide internet marketing educational resources/events, but they also included   Digital Mobile App Marketing Opportunities for exhibitors/sponsors which included mobile showrooms, promoted posts, push notifications and sponsorships for the exhibitors.

Cosmoprof also integrated “Print Buzz” and Press Releases in the the marketing mix to share what has been said about the Cosmoprof North America show. Also on their website is the option to subscribe to the Cosmoprof newsletter, which is a great way to integrate their marketing efforts and maintain contact following the event.

Cosmoprof has a relatively consistent look, with the green Cosmoprof logo on all platforms; however, the resolution could be improved on a few. They also feature a woman in a blue whimsical dress on some channels, but a more dated green background (that matches their logo) on their less active channels. 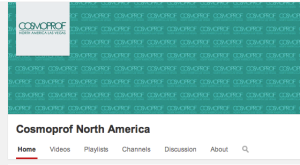 Overall, this appears to be a very extensive event. Some of the highlights that stood out to me, and were previously mentioned, were the implementation of a Beaut-E Zone panel, designed to help create social buzz, as well as the resources for beauty business owners (i.e. the interactive area and panel of YouTube speakers).

One item I feel as if they could improve upon themselves, is the use of videos. While there were two videos posted on their Facebook page during the event, they were not included on their YouTube page, which could use a facelift (no pun intended) and some more video uploads. With a panel of speakers strictly tailored to YouTube, Cosmoprof clearly knows the importance of video but has yet to implement it themselves. Additionally,  while their site is very informative and has a lot of information, it’s a bit busy. I would think they may be able to benefit from an exhibitor log-in that keeps track of any important dates, information, check-in’s, locations, etc. for each individual vendor. Lastly, their website includes a photo gallery, but they are of images from the prior year, rather than a live feed of 2014 images. In closing, while they may be slow to update some items such as their photos and YouTube channel, only two days after the event they started their countdown on the website for next year. 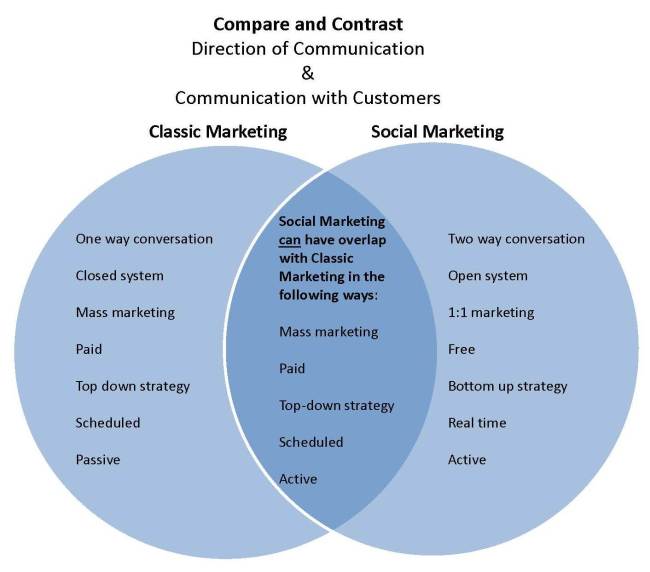 While social media is not necessarily “better,” it does provide greater benefits in regards to consumer feedback. Not only does social media allow the consumer to have a voice and be heard, it also provides the marketer with useful information and insights to strategically alter future marketing campaigns (both social and classic). While classic marketing is unable to provide these same benefits, it can and often should be (budget permitting), utilized in conjunction with social media to create the most effective marketing campaign. Classic marketing remains powerful in marketing to masses and creating initial awareness through various channels such as television, radio, print, billboards, etc. While classic marketing can still be utilized effectively, it can often be improved upon by listening to the consumer through interactions that take place on social media.

In a May 2014 article about Twitter and television, Bennett discusses the powerful relationship of a traditional media outlet and modern day social media (http://www.mediabistro.com/alltwitter/twitter-tv-stats_b57306).  While classic marketing may provide mass awareness, social media enhances this traditional marketing medium by creating conversation among viewers. The Super Bowl is a great example of how advertisers are leveraging television commercials by including social media. In fact, “Hashtags were used in 57% of nationally-run Super Bowl ads” (Sullivan, February 2, 2014).