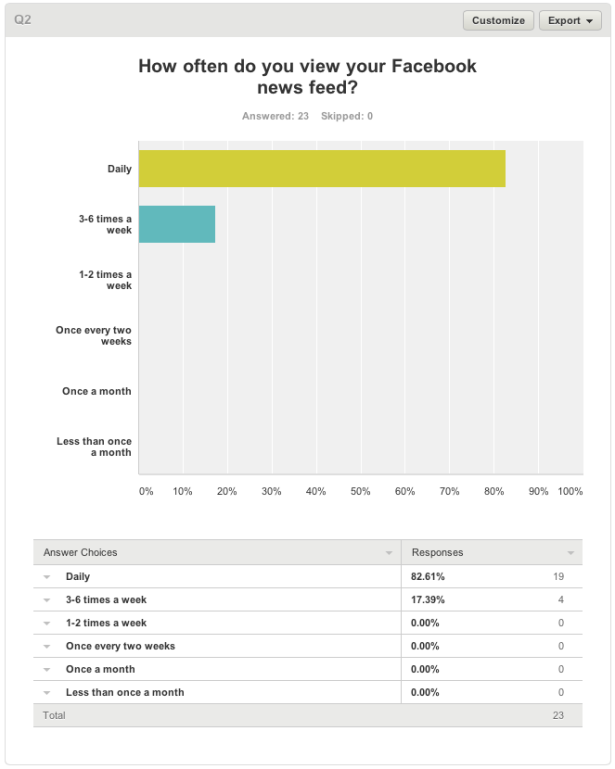 These type of ads are likely more apparent to most users because they are located in the feed of information they are scrolling through, rather than on the side. Additionally, if a Facebook account holder primarily uses their mobile device for Facebook, they would likely have only seen newsfeed advertisements as there is not a side bar on the Facebook mobile application.

Only one individual noticed advertisements solely in the right side bar.

According to the responses from question four, only 17 individuals should have answered this question; however 18 responses were collected.

Approximately 56% of the individuals found Facebook advertisements outside of their newsfeed to be “mildly bothersome,” 39% did not find them to be bothersome, and one individual (6%) found them bothersome.

According to the responses from question four, only 21 individuals should have answered this question; however only 20 responses were collected.

Forty-five percent of the individuals found Facebook advertisements within their newsfeed to be “mildly bothersome,” 30% found them to be bothersome, 20% didn’t find them bothersome and one individual (5%) enjoyed them.

Seventy-five of individuals found advertisements within their Facebook newsfeed bothersome or “mildly bothersome,” however; approximately the same percentage (76%) found the ads to be either very relevant or slightly relevant.

While many Facebook users find the ads to be bothersome, if the content is relevant and the ads are being clicked, they may still be relevant to the marketing industry. Many individuals find various marketing tactics to be bothersome, but that doesn’t mean they don’t work. Further research is needed to determine the return on investment (ROI), and thus the effectiveness, of Facebook ads as they pertain to online marketing.

To improve survey results, a larger population should be surveyed and alternate online survey programs should be considered. In using a basic, free platform, many limitations prohibited me from tailoring the survey to the individual based on answers to previous questions. For example, if someone were to have entered the survey and said they did not have a Facebook account, they should have been exited from the survey. Based on a peer’s survey, it appears other online platforms offer this feature; however, this particular free version did not, thus increasing the possibility for inaccurate results.

As a professional in the marketing field and a graduate student studying social media, I have chosen to examine Facebook users’ opinions about Facebook advertisements.

Although Facebook advertising may seem like a great tool for marketers, how do Facebook users feel about this tactic? As you may have noticed, Facebook not only shows advertisements on the right side of your screen, as shown here (Hootsuite & Bounty), but it also shows sponsored advertisements within your news feed.

Sample of Facebook ad as shown outside of news feed, on right side of screen

While these advertisements may seem annoying to Facebook users, Facebook also gives us the option to hide ads from a specific company and even take a survey to make your News Feed “better.” Whether the ads are annoying or not may be irrelevant to marketers if they produce a return on investment.

Although I was personally annoyed by some of these ads initially, in particular those that appeared in my feed as opposed to the right hand side of the screen, I also grew to appreciate their surprising level of accuracy in regards to my interests.  From a user experience perspective I can see how these advertisements can be annoying; however, from a marketing perspective I can also see how extremely powerful they can be. Being torn between these two opinions, I find myself wondering what other users think and whether or not having a marketing background affects their opinion.

The following are the instructions for our Research Methods in Mass Communication surveys assignment: Identify one service, register for the free trial and explore how you might use one of these programs to answer a research question you may be considering. Create a short survey and distribute to your friends on social media. Explain the purpose of the survey and what you hope to better understand.

I have chosen to use Survey Monkey, a free online survey software & questionnaire tool, to further investigate Facebook users opinions pertaining to Facebook advertisements. While I don’t believe a “short” survey will provide conclusive evidence regarding this matter, I do hope to achieve a better understanding of users opinions by collecting evidence from a larger sample size than just myself.

While I will be administering the survey formally on Facebook, it can also be found here.

NOTE: Initially this survey was designed to have a “weed-out” question asking individuals if they have a Facebook account and if they did not the survey would end. However, this feature is only available through the paid version of Survey Monkey. For this reason, I have included the question; however, it is the only required question. In the event the individual does not have a Facebook account, they are instructed to answer just the first question and select “Done” to complete the survey. Additionally, the unpaid version of Survey Monkey limits surveys to 10 questions.

Results will be provided publicly the week following the administration of the survey.